4 Ways Your Cat Talks With You 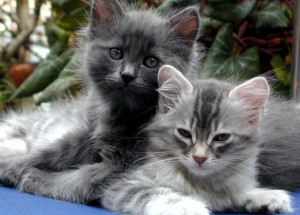 Do you ever wonder what your cat (or your friend’s cat) is trying to tell you? Your cat talks with you; it is just a matter of figuring out what he or she is saying.

Recently, I was watching my friend’s five cats while she was away. I noticed that when I pet them, they arched their backs up really high, but I had no idea if that was a good thing or a bad thing. I wish I would have known that was a sign of contentment, because then I wouldn’t have stopped petting them so quickly.

Along with arching backs, cats also have plenty more signs to let you know how they’re feeling. So, if you have a cat or are around cats frequently, it’s your turn to be the detective. You can listen to your cat and watch his behavior and body language to determine what he is saying.

Here are some things to be on the lookout for . . .

Vocalization: Your Feline Is The Cat’s Meow

Meowing – Did you know that cats typically meow to humans but rarely to each other?  This means that generally, when a cat is meowing, he is trying to get your attention. He might be saying, “feed me,” “pet me,” or “let me in that room.”

Purring – If you guessed that purring is a sign of contentment, you’re right. However, purring is not limited to happy felines. Cats might also purr as a means of comforting themselves when they are sick or anxious.

Hissing/Growling – If your cat is hissing or growling, he is making it pretty clear that he is one unhappy fellow. He could be angry, upset or frightened. Don’t try to comfort him; just let him be.

Blinking: I’ve Got My Eye On You

Make sure to pay attention to your cat’s face for an indication of mood, particularly his eyelids. Blinking is a sign of trust and affection.

You could also try being the first one to slowly blink at your cat. It might take some time or training though for your cat to blink back. You and your cat may have just formed a new way to mutually communicate affection.

Ears And Whiskers: It’s All About That Face

Ears – What you need to know: when a cat’s ears are flat, that most likely means he is scared or angry, and you should not approach him. Forward ears are a sign of alertness, interest and happiness.

Arched Back – As stated earlier, if a cat arches his back while you are petting him, he is telling you, “I like that. Please keep petting me.” However, if a cat’s back is arched while his fur is standing on end, he is angry or scared. Do not pet him.

Tail Position –An erect tail means your cat is happy or inquisitive. However, if the fur is standing on end, it means your cat is fearful or agitated. A tail that is down or in between the legs signifies an insecure or anxious cat. Finally, if your cat’s tail is waving back and forth rapidly, he is angry, so be careful around him.

Cats relay their emotions to us through their vocalization, behavior and body language. If you look out for these things, you will be able to better communicate with your cat in no time.